Eudora's Owl: Thoughts on being an artist 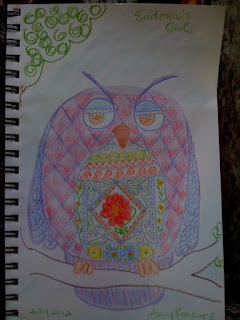 So, I've been thinking a lot about creativity.  I had an art teacher when I was in eighth grade who told me that if I ever hoped to be an artist, she hoped I married well, because otherwise, I'd starve. I believed her. After all she was an adult, and an artist, and my teacher. Surely she knew what she was talking about.

For years, I puttered about creating jewelry, crocheting, embroidering, messing with polymer clay or beads, but never thought of myself as an artist.  Even when I began writing pysanky, I still thought of myself as a dabbler.  It wasn't until I started donating things I made to charity for silent auctions that I began to think maybe my eighth grade teacher might have had her head up her bum when she gave her advice -- and this was only because I began to see my creations offered and listed as art, not as jewelry or crafts, or junk. People began asking for pysanky for special occasions, or commissioning them (which I would do for a donation to one of the charities I support, rather than for my own profit.) Then several of my pysanky were accepted by the Ukrainian Art Museum for their collection, and I had to rethink my self-definition.

Lately, I'm trying new mediums with my pysanky skills.  I'd written a number of bags and satchels, even an ice chest, with rave reviews, and thought maybe I can apply the pysanky symbols in other ways. So, I've been playing with colored pencils, paints, and markers, and having a wonderful time.

Today, this little owl was born. It's destined for Eudora, the youngest daughter of some dear friends. One of her first words was "owl" and she loves the birds.  Hope she likes it. I had fun bringing it to being. And see that egg in the basket below?  The one at the 6:00 position? that's the one I've saved for my eighth grade art teacher, just to prove that once I stopped listening to her wretched advice, I found my art. 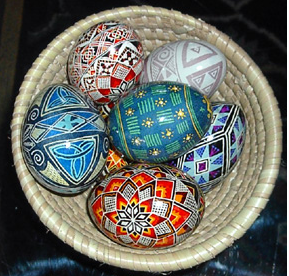