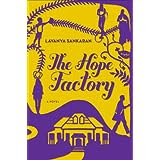 Finally! A book about India that doesn't have to do with getting married or coming of age, or American-born-of Indian-heritage going back to India/dealing with being in the west/whatever. (That's a generalization, I know, but so many of the books I've come across run on that theme, usually with brightly colored saris or spices on the cover.)

The Hope Factory is a gently told novel that takes the time to craft characters, settings, and situations, all grounded in reality and believability. Two interwoven tales: the first is that of Anand, who simply wishes to expand his business, by expanding his factory. The second story centers on Kamala, one of the servants of Anand’s family, a single mother, subsisting on a small income, trying to carve out a world for herself and her teenage son, who seems to be running with a bad crowd.

Unfortunately for each, life can become complex and difficult. In Anand's case, politics and conflicting loyalties move in to muck up the land sale. (Having experienced India politics through family who lives there, I can attest to the good job done in the depiction.) For Kamala, the precarious balance of her world and economics is threatened by changes in her rent, and in the needs of her son.

This is a story of real people, with real needs, worries, hopes, and concerns. The characters come across as such. I found the second half of the novel moved more quickly, but that the first half needed the pace it did to set the stage and create the world. The end was a bit abrupt, but true to life. We rarely wrap episodes of our existence up into neat little packages, but they tend to slide, with hope, into the next day, the next challenge, the next phase of life. And sometimes, the next adventure.

I received this book via the Early Reviewers program of LibraryThing. Many thanks to LT and to the publishers for letting me into the Bangalore of Anand and Kamala.
Posted by bookczuk at 6:58 PM No comments:

Repurposing is the bane of my existence 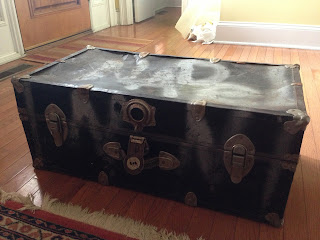 /rēˈpərpəs/
Verb
The endless possibilities presented by junk from my attic, which make it impossible to discard anything.
Posted by bookczuk at 4:20 PM No comments:

When Ukrainian Eyes Are Smiling

St. Patrick's Day, for the past 29 years, makes me think of my honeymoon. Javaczuk and I were married on the Eastern Shore of Maryland on the Ides of March, 1984. Through the workings of fate, my mother, brothers and their wives were all with us on our honeymoon (that's what happens when you sneak off to get married during a family reunion.) We were staying in some cabins on Ball's Creek, where it intersected Broad Creek (I kid you not.)

Two days after we wed, the family consensus was to head to Tilghman Island for a pretty renowned seafood place, sure to satisfy the oyster lovers in the family. And so, we set off and drove from our creek over to the island for a feast -- to Harrison's Chesapeake House -- on St. Patrick's Day.

So, at Harrison's, they were having a huge St Patrick's Day party. So huge, that they weren't sure they could accommodate our group of 5 Nadels and 2 Romanczuks. For while we covered a fair number of nationalities within that group (Ukrainian, Scottish, German, more Ukrainian, and some Hungarian) we didn't have any of the green in our heritage. As we turned to leave, my eldest brother threw his arm around my shoulder, and announced in a loud voice not to worry, little sister. We'd find somewhere else to celebrate the marriage.

Someone overheard him (as I'm sure was his intention), and we quickly found ourselves at a table, with a buffet of oysters, served 20 ways. Plus there were other delicacies: fresh shrimp, crab, fish, all from the Chesapeake Bay. We laughed and ate. Drank and ate. Toasted the new bride and groom and ate. Ate and ate. Sang along with the rather drunken band playing Irish tunes, and ate. People sent us drinks and toasted us some more. I made it through about 5 or 6 ways to have oysters, and then had to undo the button on my trousers and let the zipper out a little, so that I could breathe. I was totally stuffed to the gills with gills, and molusks, and other delights of the sea.

As I watched the room through a rosy glow of abundant food, drink, family, and love, the band leader came to our table. He said he wanted to offer us a toast. Javaczuk and I smiled at him. The fellow then hauled me to my feet, and pulled me to the center of the room with him, where he began a drunken toast, and an even more inebriated version of "When Irish Eyes Are Smiling." The whole room sang along, toasting us, (my groom at the table with my family, and the oyster-filled bride, being clutched by a soused Irishman, in front of 100 people singing to her.)

And what was I doing? I was hoping my unbuttoned, unzipped trousers wouldn't tumble down. I am convinced they were held up by the miracle of St Patrick. 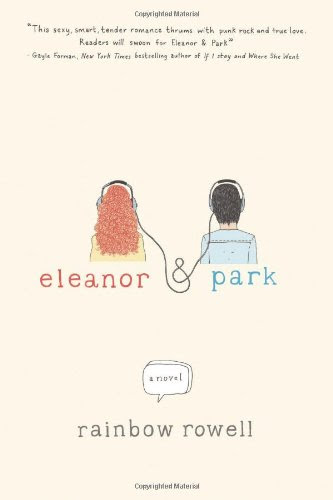 Not fair. I'm still recovering emotionally from John Green's Hazel and Augustus from The Fault in Our Stars. Then Rainbow Rowell goes and introduces me to Eleanor and Park. I'm not sure how much more my heart can hold!

Having experienced adolescent first love, there's really nothing poetic about it. It's awkward. All those hormones rushing about and bodies changing. Just a mess. But when you add in social circumstances that heavily weigh the scales to the "sometimes life really hands out bad stuff" side of things, love can get complicated. Eleanor and Park are about as far apart as two people can be in most ways -- except they both are smart and have incredible hearts, with huge capacities, and untapped depths. The gentle unfolding of their friendship and love is a lovely thing to witness. The language of the novel is fluid, beautiful, and laced with imagery that makes the reader stop to pause to absorb it all. The story is told from alternating points of view of Eleanor, large, lumpy, colorful, living in an abusive family situation, and Park, half-Korean, passably popular, into alternative music, part of an close knit extended family.

So much about this book struck home: the whole kids can be really cruel bit, sibling love and sibling rivalry, the awful things people do for love in bad relationships, and the beautiful, heartwarming ones done for love. If you've ever been fat, or short, or skinny, or had the wrong hair, or wore red shoes that the other kids laughed at, or were the new kid, or wore clothes that weren't the current fashion but not because you wanted to or even knew the difference, or were not the usual in any way, you'll be able to identify with "Big Red" as she struggles to find a place in a new school, where the only faces who smile back are those on the edge of the crowd, too.

I seriously loved this book.

Here's a link to a NYT review by John Green. Yes, the same one who broke my heart and made me cry over Hazel and Gus.
Posted by bookczuk at 5:08 PM No comments:

The Troubled Man, by Henning Mankell

Oh (expletive deleted.) I so didn't want this book to end the way the epilogue did. I saw it coming, and with each foreshadow said, "No! No! No!) I'm shattered.

It was a little disconcerting when I first started reading, because the last one in the series I read was actually the second book, where Kurt met Baiba. This one takes place 15 years after he last saw her. I hadn't realized, when I started reading, that "The Troubled Man" was announced as the last Wallender book. Now I'm sitting here snuffling and wiping tears away, as I absorb that I've lost yet another old friend and favorite series. The story was a good mystery, but the personal details of Wallender's relationship with Linda, Mona, and Baiba really got to me, as did his fears of following in his father's footsteps. I, too, have the worry of losing my memory as I age, and felt that Mankell did a beautiful job putting the reader in Wallender's thoughts and fears. I have read the series out of order, so still have a few books to go back and read -- thank goodness.

Goodbye, Kurt. May you live your final years surrounded by the love of your family. You've earned it. I'll miss you.
Posted by bookczuk at 11:58 AM No comments: