Lucky Us by Amy Bloom

I had to let this one marinate a little bit. There's a lot to consider within this book. Lucky Us centers on the concept of family, whether it is blood or created. The opening line is a great one: "My father’s wife died. My mother said we should drive down to his place and see what might be in it for us.” And indeed, young Eva, who only saw her  father on Thursdays when he came to visit Eva and her mother, take a road trip, where Eva meets her flamboyant older half-sister Iris.  but is also abandoned by her own mother. It's just the first of many episodes where family is created by those around you, and where characters shift and reshape themselves with chameleon-like ease.

The girls run away to Hollywood, where Iris has hopes of becoming a star. She is remade by the studio and her character is revealed bit by bit. The sisters gather and create a home and family, and though they flee California when scandal strikes, family tags along as they move to the east coast to recreate themselves in the New York area.  These characters are survivors, which is a good thing, as the life they create, and the characters they don do not always have an easy go of it. But, they're compelling, and the novel is well written and paced, so the ride is easier for the reader than for Iris and Evie. There was one thread of the story which, while I enjoyed very much, seemed somewhat disjointed -- more as a backstory for the reader than an experience for the two girls. It also involves a reinventing of a character, who seems minor but ends up quite significant. (I'm really trying to be mindful of not revealing spoilers as I write this.)

The title, Lucky Us, is a bit misleading. It reminds me, in some odd way of the line from "Young Frankenstein":  It could be worse. It could be raining. There's a lot in this book that could be worse, but a lot that it the raining. However, Bloom is excellent at her craft, so even when it's raining, the skill of the writing carries through until the sun comes out. Lucky us.
Posted by bookczuk at 7:42 PM No comments:

Dance has become a part of my life in these handful of years after the deaths of my mother and brother. It is something that moves my soul in a way nothing else has, and brings my joy of music right along with it. I stumbled into it, looking for a way to fulfill a promise to my mother, that when she was gone, I should do something to take care of myself now. And when I say stumbled, that's almost the truth. I went in search of a yoga class and found a dance class instead, but that's another story.  Yesterday, dance once again carried me into the realm of memory, this time, via a Nia routine that in many ways mimicked the swim of the dolphins.  It brought to mind two memories of my brother Erico, which are linked below:

A birthday gift for us

I've often said that the heart is a marvelous thing; it keeps our loved ones alive and close, even if they are neither one nor the other. It may be an organ made of tissue and blood, but it is also made of memories.
Posted by bookczuk at 10:09 AM No comments:

An Audacious Alphabet, written and illustrated by Amy J Francisconi

Simply splendiferous! I love everything about it, from the bright yellow cover to the fact it was printed right here in Charleston! As to the tasty tidbits in between, wowza! Don't ask me to pick my favorite drawing, the other 25 favorites might have their feelings hurt.

That the author is a incredibly treasured friend makes no difference. This book is fun, funny, creative, and oh so clever. So happy our book loves brought us together to collide in the wondrous BookCrossing universe. Who'da thunk that I'd find a piece of my soul living up in Delaware?

This book has a permanent place in the czuk home.
Posted by bookczuk at 12:22 PM No comments:

The Serpent of Venice by Christopher Moore 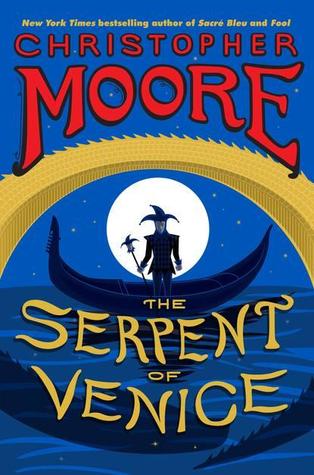 Mixed feelings on this one-- Christopher Moore can make me howl with laughter, but this one combined so many elements (previous characters, CM books, several Shakespearian plays, several other literary and dramatic works, and an extreme sense of the absurd) that it took me a while to find the rhythm. I actually put it aside for a few days and then started over.

Previous characters: Pocket the fool, his assistant  Drool, and the monkey Jeff (also the ghost of Cordelia, last seen romping happily with Pocket in Moore's <i>Fool</i>.

Shakespearian plays: Merchant of Venice, Othello, with throwbacks to Lear

As to the others you'll have to discover for yourself.

But forget everything you know from your high school/uni English classes. This Venice has sea serpents in it. And it's a wild ride.
Posted by bookczuk at 8:37 PM No comments: