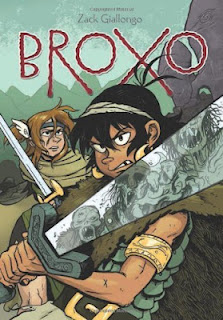 A graphic YA debut novel -- now that's kinda cool, and probably why it was on my wishlist. (Many thanks to Tor books for sending it on and proving that wishes really do come true.)

Zora, a princess with a bit of a chip on her shoulder, and a dislike of hunting, arrives on the mountain of the Peryton clan, hoping to lead them back to her father and win his favor. What she finds instead is a desolate and dangerous place, inhabited by gnarly creatures, mostly intent on making her their next meal. She also finds Broxo, who calls himself king of the mountain, his amigo Migo, who reminded me of a uni-horned bear/panther, and a witchlike woman named Ulith (and her weasely minons). And there are some unhappy walking dead about, who periodically crawl from a noxious lake in search of living breakfast.

Broxo and Zora learn the truth behind the walking dead and team up to help all become right in their world.  While I found the art sometimes a little muddy, I still had no trouble following the story.  There were some nice moments both in the graphics and in the storyline, and only a few where I had to go back and re-examine panels to make sure I was getting it right.  (It may have also been due to a fever -- my temp was 102.5 when reading it this morning, until meds kicked in.) If Broxo was a little cloutish, it's only fair to remember that he basically raised himself.  If Zora was a little snotty, it's only fair to remember that her lack of social skills probably came from being a princess.  Migo, however, for me was a star, brave, loving, loyal, and strong.  I want a Migo in my life.

This book is scheduled for release October 2, 2012