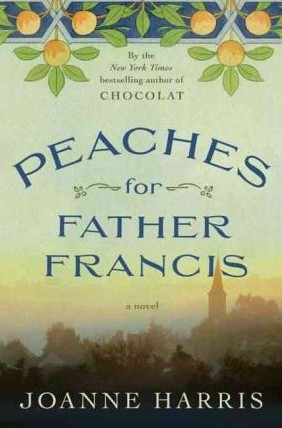 Note: This book also goes by the much better title of  Peaches for Monsieur le Cure.

I picked this up to read strictly based on my love of the book Chocolat. There have been others by the author that I have picked up for the same reason, and liked with mixed results. This story features many of the same characters from Chocolat, with many of the same delicious flavors and overtones, but little of the magic that grabbed me in the original (published in 1999). It was a good enough story, but hasn't touched the memory that is still strong in my heart after 16 years, several re-reads and a wonderful screen adaptation.

True, Harris has managed to create (and maintain) some remarkable characters, and touch on some very key elements of human nature, both good and bad. But I wanted magic, too.

The Moment of Everything

I picked this up because it was about a bookstore, more or less. It didn't grab me, at first, so I put it aside, but picked it up again after reading the reviews of others on goodreads. Those reviews told me two things -- the book got better as it went along, and apparently, a lot of people picked it up because of the cover (which I'm embarrassed to say I didn't really look at until I read it charmed others. Okay, yeah, it's pretty cute.)

The book did get better on the second pick-up. In fact, I went from thinking I'd abandon it, to curling up on the sofa and reading till there were no more pages. So, yes, I liked it. I think there are enough reviews online that cover the plot, but things I liked were the reverence some of us have of independent (used) bookstores, the idea that romance can, indeed, live on the pages of books, characters that were believable in their quirks and flaws (despite the gay best friend scenario that cropped up), coffee and books go together, and a setting in Mountainview, CA. There were other likes, too, but that's enough for now.
Posted by bookczuk at 5:31 PM No comments: