I remember taking friends visiting from England on the czuk-walking tour of Charleston. So much of British and colonial history are intertwined, that it was kind of fun to joke about the what if's the Revolutionary War had gone differently. My friends insisted Americans would pronounce aluminum correctly and refer to the proper sport with the term "football". One of my friends melodramatically pronounced July 4 to be a day of mourning for him, rather than one of celebrations. 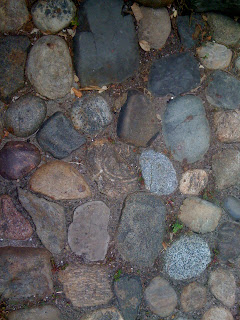 "Yes," countered his companion.  Think of all the souls who would be speaking proper English now.

We bantered back and forth.  They bemoaned being in such a barbaric country where beer was not served at the proper temperature.  They wailed that nowhere could they find proper cream, only "heavy" cream or something called half-and-half.  And the things called English Muffins? Pah!

We continued to walk around downtown, until I took them to one of the cobblestone streets that still are around. The stones had been ballast for ships coming to Charleston from around the world, a large number from England. We spent the next 15 minutes stepping from stone to stone, "walking on Mother England" and the precious ground of my hometown in with each footfall.