Satisfaction Supreme: I Made it Myself

Every person who likes to fiddle with things to make other things has met that magpie genie who looks at bits and bobs and tries to figure out how to puzzle the pieces into something else -- something fun, clever, and, dare I say, shiny. (That genie is second cousin to the one that looks at something handcrafted and says, "Oooh! I think I can do that!".) 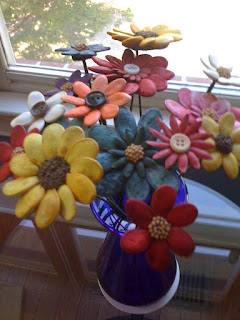 In my family, I'm famous for "making stuff". I think there's a mixture of tolerance and pride with much of my creations.  The tolerance definitely comes into play with the boxes of supplies that load shelves and closets, fighting books and yarn for valuable real estate in our home. In fact, there's the story of one Christmas, early in our marriage, when my stepdaughter came to visit. I had planned an orgy of crafts and Christmas cookie baking, all excited to have a little girl to share this with. She was maybe all of three years old, and was more interested in Care Bears then making a popcorn string for the tree. I kept trying.  Maybe we could make angels with cotton and construction paper, or gingerbread cookies, or, or, or... Finally, my world weary stepdaughter looked at her dad, who had just come home from work, then looked at her lunatic stepmom, sitting on the floor, happily cutting and pasting sparkly bits onto glittery objects. In a voice that to my memory sounds like a three-year old version of Marlene Dietrich, she uttered, "Is she always like this?".  Now, nearly 30 years later, javaczuk still shakes his head, and patiently says, "Yes." 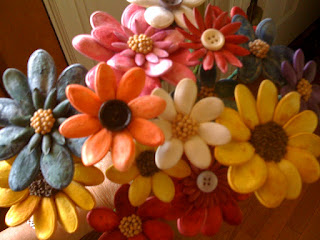 In November, I had carefully cleaned squash and pumpkins,saving the seeds to roast for a special taste treat. Unfortunately, for some weird reason, these particular seeds had proved to be unusually tasteless. Unwilling to throw them away, I stored them for some future use that didn't involve eating. Something would come to me, as sure as the sun and springtime would come after a bleary winter.

A few weeks back, I stumbled upon the carefully cleaned, tasteless seeds. And I remembered something I'd seen in a display of handcrafted goods. Something that had made me say, "Hey! I can do that!"

And so I did. I started them up in the cabin when I was up there earlier this week, and put the finishing touches on today. I looked at them and smiled, then thought, "Phew! I never have to do that again!"

Email ThisBlogThis!Share to TwitterShare to FacebookShare to Pinterest
Labels: crafty, i made it myself, summertime