The Bear and the Nightingale by Katherine Arden

The Bear and the Nightingale  is a lovely blend of fantasy and fairy tale, with a strong female lead facing not just the challenges of society, but those of nature and myth, too. As with other books built on Slavic legend, there was a bit of familiarity to those of Ukraine, with a slight difference, like the tartness of a crab apple to a Pippin plucked fully ripe from the tree. I was singularly surprised , but not disappointed, when the elements I expected or anticipated didn't play out. Arden did a good job at capturing the ugliness of crowd mentality in the townspeople, depicting personalities of the jealous and disappointed, relating the interplay of that which we delegate to fantasy with real life, and showing different sorts and strength of love. Overall, I enjoyed this book and will look for more by this author.

Thanks to LibraryThing and the publisher for sending this copy my way.

A Proper Drink: The Untold Story of How a Band of Bartenders Saved the Civilized Drinking World 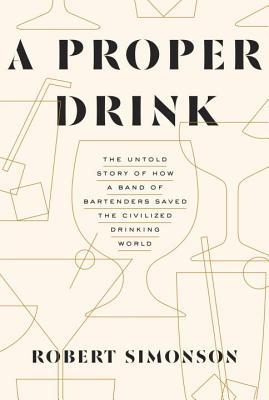 I received this book nearly two months ago, but just was able to finish it. This was not because I was busy, or didn't like the book, but more because Javaczuk, my ex-bartender husband, who lived in NYC for a bit, and who still holds a fascination for the art of spirits tucked it away to read. (To be fair, I knew he would, and as I had other books to occupy me, and a good bit of art as well, I was fine. My only qualm was that it delayed my thoughts on the book for Blogging for Books, and the publisher, from whom I got my copy.) This review is a combination of both our thoughts: the expert and the novice.

For both the mixologist and the lover of fine cocktails who knows nothing about making a proper drink, this was an interesting book. It is praiseworthy for its comprehensiveness, Simonson's ability to make the reader feel as if they are observing these pioneering mixologists with short, simple descriptions, and its ability to put the modern cocktail movement in historical context. From my point of view, I was happy it spurred Javaczuk on to try some of the recipes provided. It also was just plain interesting reading, introducing the novice (me) to some of the finer nuances in crafting a cocktail. The general index, and the index of people interviewed/corresponded with were also helpful, but made me realize this was essentially just one (plus a few outliers) city, which made me wonder who else was out there, in untapped regions. It also made me realize that my personal slap-dash method of making a drink would make most people shudder.

Only thing other thing that would have been nice to have seen would be some pictures of the bartenders and bars, as some of Simonson's media articles have done, but understand that there are cost considerations in publishing a book.

This certainly will hold a place of esteem (and be a point of reference) in our collection of Mixology books.To end with Javaczuk's thoughts, for he certainly knows far more on the subject than I do; "As far as I know, this is the best book existing on the subject. Brilliant piece of research.

The Gates of Hell (The Shards of Heaven, #2) by Michael Livingston 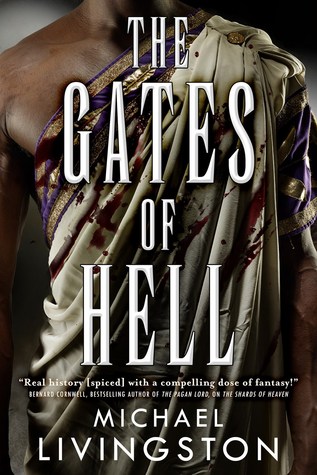 The demons of the internet have eaten my review two times now, which is really not very nice, especially since this is a book I looked forward to reading, enjoyed while reading, and looked forward to telling the online world. (insert swearword of choice, because all of them have probably gone through my head, when I realized my first review was gone, and when the replacement review blinked away before my eyes.)  But back to the point:

When last seen by the reader, the characters from The Shards of Heaven had seen better times. Antony and Cleopatra are dead, their children held captive by Octavian, probably the only character in the book having a good day.  As Caesarion and his companions carry the Ark of the Covenant through secret tunnels to bring it to safety, they meet misfortune, battle, a cave-in and shard enhanced battle with Juba of Numidia. It was very much of a cliffhanger.

The dust has settled a bit in the The Gates of Hell. Selene and Juba, despite a forced marriage have found joy together. The peace in their relationship is threatened as Juba is called by Octavian to once again wield the Trident of Poseidon to defeat Rome's enemies. And that's just the start of things.

Once again, Michael Livingston has taken history, and tucked a little fantasy and supernatural into the crevices and crannies of known time. As a reader, this delights me no end. Livingston's writing is crisper, sharper in this second book, helping the mind create clear depictions from description. His characters have grown also, exhibiting a complexity very true to life. The tug of good and evil forces, whether in a battle or within an individual, helps bring even more humanness to both the heroes and villains of the story. The tale begins in Rome, then heads on a journey through the old world, to the waters of the Nile, to even the very Gates of Hell, all with history, intrigue, and a little magic.  And yes, I did cheer out loud at a few happenings, and laugh at the Easter eggs I caught. All in all, it was a good adventure.