Thanks from Harry, and the rest of us, too

A few weeks ago, a neighbor I was quite fond of died. He was born the same year as my mother, which put him at 95, three years younger than my father would have been. In the aftermath of my neighbor's passing, others have spent time sharing small stories of him. At one point, someone praised the fortitude and remarkable nature of so many of my parent's generation, remarking they weren't called "the Greatest Generation" for nothing.

In going through some more memorabilia, I found this letter from Harry Truman. I like to think it shows a certain class and dignity I have long associated with the Office of the President. 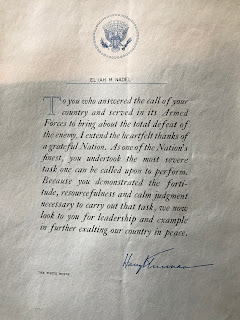 I've now looked up the birth year range of The Greatest Generation (formerly the GI Generation) and see that it spans from 1910 to 1924.  And though the youngest would be 93 and the oldest 107, I, for one, am still grateful for their service and sacrifice.