Resting in the arms of Love

My father used to say he was a trendsetter. After all, he'd called people meatheads for years before Archie Bunker nicknamed his son-in-law that on  All in the Family. He also had a chair, a throne, that no one else was supposed to sit in besides him. One of the first purchases he and my mother made in 1968, when the family finally moved out of the little house that had been our home for 17 years, was a recliner just for him. I remember sitting on the arm of the chair, or on the floor near by, talking with Daddy about his life as a child actor, and growing up in the Bronx.  But to sit in it, myself? Never! (except if he wasn't home and I wouldn't get caught!)

An aside: My favorite story was when he was cast as "the pest" in a silent movie called Womanhandled, and the cast had to go on a road trip to Texas to film scenes where Richard Dix was pretending to be a cowboy. My father was a little kid, maybe 6 or 7 (though he was diminutive, as I am) and was playing the part of a 4 year old brat. Regardless, he couldn't travel alone, so my grandmother accompanied him. She, however, kept strict kosher, and refused to let him eat what the rest of the cast did. She bought food and prepared meals for the two of them. And when there was a barbecue in the cast's honor, she held fast and refused to let him eat all that wonderful food-- which was why my little Jewish grandmother and her son were the only two people in the entire production that did not come down with food poisoning afterwards. Sometimes religious dietary laws really come in handy.

By the time I'd gone off to college, the rules had relaxed. We all knew, though, that once my father got home from work, The Chair was his, and we had to park our bottoms elsewhere. He even co-opted  a hand signal that was actually a punchline to a joke -- a hand signal in the joke that meant "enough of that shit".


(Left: that's me, in 1977, with our mutt Patonka and my flute, and some very stylish glasses, in The Chair. It's hard to describe the fabric. A modern weave that was kinda scratchy, enough so that you never wanted to sit in it in shorts. )

That chair traveled with the family from St Louis to Charleston, back to St Louis. After my dad died, the chair became my mother's throne. It travelled with her one more time, back to Charleston when we joined households. By this time, it was a bit tattered, so she had it reupholstered. Javaczuk marveled that she was able to find another fabric just as scratchy. 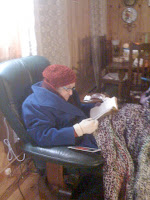 At some point, my mother decided that though she loved The Chair, it was becoming hard for her to get in and out,  or to push it back to recline in, so she got another chair. The Other Chair wasn't allowed in the living room, because The Chair ruled there. But later, when we'd shifted to the house on the lake, the Other Chair, emerged and became part of the room we all spent the most time. I remember my nephew, who now is in high school, crawling all over it when he was under two, and delighting that he could make the seat of Other Chair shift into a reclining mode. After a bit, Other Chair, shifted again up to the cabin, so my mother could have a comfy spot there. Most of the pictures I have of her in it are really terrible, but I like this one,  because I love how she's bundled up inside the cabin, during winter (yes there was a fire going, maybe 5 feet away from her). As one who also is always cold, it makes me realize I come by my tendencies honestly. 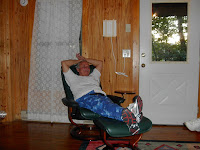 The other picture, which I also love,  though it is not of my mother, was taken in 2006 or 2007. (The dating of it comes from the knowledge that we changed the curtains in 2007 and painted the door, but it was in the fall and this visit was spring.) Heatherico came up to the cabin with me for a visit. You can see who claimed the green chair in a characteristic arms over head pose.

We are now talking about selling the cabin, moving into yet another new phase of life. Some of the furniture will convey, some we'll sell, and some we'll keep. When the fires threatened the area, it was a lesson in "what would I miss the most? " There aren't that many things I really want to keep:  a painting or two, a gift from Heatherico I treasure, a picture, some things Javaczuk wants, and, the chair. But I was resigned that it might not be a possibility. Luckily, the forest fires, though they were close, didn't directly threaten our little haven. And when my sweetheart went up to winterize the place (there still was too much smoke in the area for me to safely go), he came back with what he could fit in the car from our list, including the chair.

We have it set up in our room, where Javaczuk has a reading nook in one corner and I now have one in the opposite corner. I started meditating in an effort to help improve my breathing and health, and the chair is my place of choice. I delight in curling up in it to read, or to have my tea. It's comfy, designed for diminuitve folks, and is stuffed full of memories. And every time I sink into it, I feel I am resting in the loving arms of dear ones now gone. 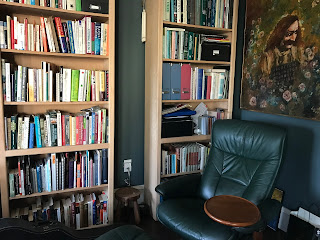 SaveSave
Posted by bookczuk at 4:53 PM