Yesterday, I returned home to find this sight at the end of the hall outside our apartment and posted a picture on social media:
My friends are clever, and the usual round of comments followed, the first being from Spedbug (who has been mentioned a couple of times in this blog, and also shares the name "the other Amy" with me).  "Either that or a snake has mailed itself to you. Be very careful"

I couldn't get the image of snake-in-a-box out of my brain. It tumbled into the images from The Little Prince, depicting a boa constrictor digesting an elephant. (For those unfamiliar, here's a link to The Little Prince, boa and hat illustrations.) Every time I looked at the four foot long box, lurking quietly in the corner where it had been since I dragged it inside, I smiled.

The rest of the day tumbled on. Husband arrived, opened box. Sword. No snake, though I looked extra carefully through the packing.

Usually, I turn electronics off in the evening, muting texts, calls, resisting the lure of the great beyond bound up in the internet, shunning videos and television after a certain hour. But there's an exception to almost every rule, and last night, the phone stayed on, which gave the opportunity to check email once more before turning it off. There, I found an alert for a blog post, which really confused me at first, because though it clearly was from my friend Speddy's blog, it had the name of this one in it. I clicked through.

And then I laughed. Joyous laughter. Javaczuk peered over my shoulder, so that we both were hovered over my iPhone, bathed in the light of its screen. And we laughed.

It's 9 panels of deliciousness (especially if you're a snake), humor, czuk tidbits, geek humor, and creativity. And she didn't even know about the song I used to sing when I went in our back yard by the lake, to warn the cottonmouths away. But she's right. I'm small, gray, and in some circles, known as Mouse. Click on over to An Unwanted Delivery. You can add a smile to your day. 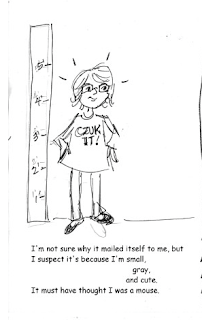 Edited to add my own drawing of the scene: 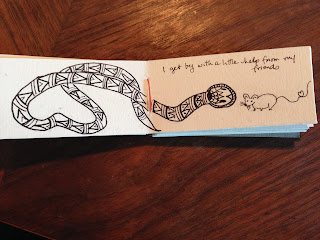 Email ThisBlogThis!Share to TwitterShare to FacebookShare to Pinterest
Labels: czuklife, friends, the other Amy