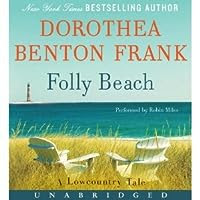 Dorothea Benton Frank is kind of hit and miss with me. I'll like one book, get frustrated with the next couple, promise myself never to pick up another one, weaken, and she then hits one out of the park. To be fair, most of my frustrations come when there are inaccuracies about my beloved lowcountry. I know novels are fiction, but there are some things with which I just can't tolerate liberties being taken. So, when a friend gave me a copy of Folly Beach I almost didn't read it, because the last DBF book I'd read had been one I'd enjoyed. By all rights, then, this one should have made me shriek and throw it across the room (in a very lady-like manner, mind you.)

This story is told in entwining two parts. That drives some folks crazy, but I like parallel stories. And I particularly liked the thread that was presented as the script of a one-woman play about Dorothy Heyward, wife of Debose Heyward (and author, playwrite in her own right). The other segment was pure Frank: a widow coming home to the lowcountry to heal and grow. That the second tale involved not one, but three cameos by people I know, gave me a bit of a chuckle. I was less tolerant about some errors in location, distance, etc, but hey, I got Gershwin, and Porgy and Bess. (I do have to say that I'd always been told the house Gershwin stayed in was washed away in a hurricane sometime before I first hit Folly in the 1970's, not with Hugo in 1989. And the legend I know is that the bells of St Michael's inspired the first notes of "Summertime". But still, there's a lot of history and legend told in this book that I've heard, too.) I'm always a little surprised at the Yiddish that occasionally slips into these books. I can see people furiously googling "ungapatched" (which is not how I would have spelled it, but recognize it as the same as "ungepatchke" which I learned meant too much of anything, in an un-pleasing over-the-top way.) I'm still wondering about"fachalata" and if it's a play on farkakt aka fakakta. (Look it up.)

I think that the information I learned about Dorothy and Dubois Heyward is what carried the book for me, and what bumped it to a 4 star in my enjoyment. That, and the mention of my dear friend Harriet MacDougal Rigney in the acknowledgements.
Posted by bookczuk at 4:42 PM