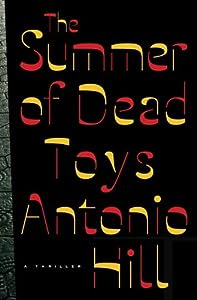 Barcelona is climatically on the other end of the spectrum from the settings of the Nordic Noir I've been reading, but Antonio Hill packed a similar wallop of characters, mystery, into the pages of The Summer of Dead Toys, plus added the promise of a new series/Inspector to check out.

Hector Salgado, an Argentinian, now a inspector in Barcelona but now on probation after an episode violence in one of his cases, is asked to unofficially look into the apparently accidental death of a well-to-do young man. But Salgado discovers the case not to be as clear-cut as assumed. His journey to discovery takes him through some of the shadier parts of Barcelona life, the areas tourists will probably never see. The story unfolds with craft, skill, and intelligence. The descriptions of Barcelona painted the city in my mind's eye. The book kept me interested, with two main threads of action, realistic characters, and enough tension to make me nibble a fingernail or two. And, for those who like a little noir/darkness in their reading, there's enough of that seamy underbelly exposed to satisfy.

For me, the book is a clue in itself, that this is a series to keep in mind for future reading. There are enough interesting interactions between characters that will probably be recurring, enough realism, enough trueness in the relationships. Salgado, himself, seems to be that intelligent, flawed central character, the kind of which I like to follow in stories. The book, itself, is translated, but interestingly enough, the author is the actual translator, as that's what he does when he's not writing mystery/detective novels. While there is a little roughness in the telling of the tale, I think that will smooth out with time and more writing.

Many thanks to Read It Forward for forwarding this on to me. I will pass it along, now, knowing I'm passing on a good book.
Posted by bookczuk at 10:12 AM