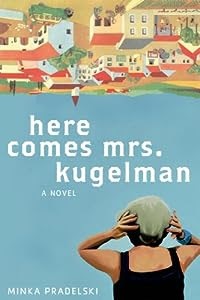 I'm a big believer in the the value of stories. I treasure the ones I learned from elders in my family, true or not. For the thing about stories is that the truth can slip as time and memory blur the edges of a tale. But a gifted storyteller is a treasure for the ability to craft images, characters, and situations for their audience.

In this novel, the storyteller is Mrs. Kugelman. She enters the world of the narrator, a young woman named Tsippy Silberberg, in a rather haphazard way. Tsippy, who has some rather peculiar quirks of her own with her eating habits, is in Tel Aviv to pick up an inheritance left to her by her father's sister. Bella Kugelman enters Tsippy's life with a knock on the door, and a story to tell. Through her words, the inhabitants of Bedzin, a small, predominantly Jewish, Polish village on the border with Germany, come to life again. She tells of day to day life, before the war, before the invasion, before the Holocaust. It's a time when children played pranks in school (or were even still in school, since those were closed almost immediately when things got bad), when people went to the rebbe for blessings before new ventures, when families sent their cholent to the baker on Friday, so it could cook in the oven all day on the Sabbath, and they would not be working to do so. Mrs K's tales take the reader right up through the start of the end of a way of life, painting a vivid picture of what was lost, both in lives and lifestyle.

The stories charmed me, especially since some of my own family probably lived a similar life. The bits in between didn't carry the same type of interest for me, and oddly enough, either did the two main characters.  The subplot of the relationship of Mrs Kugelman's stories to Tsippy's own life was a nice touch, but lacked the clarity of the mini-plots about the villagers of Bedzin. Indeed, just as kugel is often a side dish to a holiday table, Mrs Kugelman was more of a side character to the people she talked about.

I'm told the author is both a sociologist and documentary filmmaker and that her own parents were Holocaust survivors. Her interest in these survivors, their families, and the impact of horrors that occurred in that awful time, helped round this book out in a realistic way. This is her first novel. I look forward to reading more of her works in the future.

Thank you to LibraryThing Early Reviewers and to the publisher for sending me this copy of the book.
Posted by bookczuk at 2:27 PM