My father was many things: brilliant scientist, gifted actor, always ready with a quip or pun, loving father, trusted husband. He was not, however, much of a cook. I remember he barbecued for a bit, on a grill that he imbedded in a cement wall (to keep his young children from running into the hot grill)... until the wall fell down one day, because apparently my father was not that gifted with cement. However, he would, upon occasion, make for us something he called Daddy Sandwich. It was a treat at the time, mostly because it was prepared by him, but also because it was tasty. He toasted whatever bread we had in the house at the time (white, pumpernickel, or rye were the most likely candidates) and then added a layer of cream cheese. On top of this, went a layer of canned salmon, carefully mashed. (Fresh was not easily available. For the first 10 years of my life I thought salmon came from a can, or from the deli as lox.) He trimmed the crusts off the open faced sandwich, then cut it on the diagonals to yield 4 triangles of deliciousness.

This morning, I made a Daddy sandwich. No matter that the bread was gluten free, since I've developed a wheat allergy, or that, thanks to my Ashkenazi heritage, I prefer to use lactose free cream cheese, and that the salmon, was leftover wild CoHo salmon I broiled last night, or that I left the crusts on, because, why not? It was a Daddy Sandwich, and I was so happy to share my breakfast with his memory. 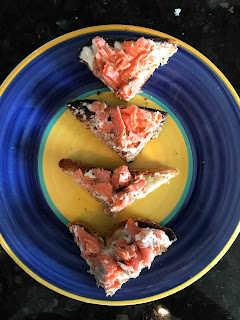