Gather Her Round (Tufa #5) by Alex Bledsoe 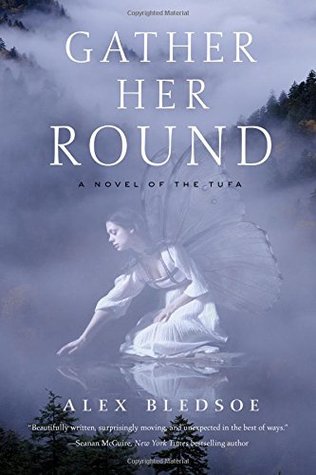 Alex Bledsoe got me hook line and sinker with his first novel of the Tufa The Hum and the Shiver. With each subsequent Tufa tale, he reels me in further. There are so many elements about the series which keep me reading: the backstory, the setting, the depth of the characters, not to mention the incredible story arcs that weave and wander between the books creating a tapestry that delights, surprises, and satisfies. When I read a Tufa novel, the plots of each book engage me, but the writing-- oh, the writing! In a seemingly effortless, unpretentious, uncluttered way, Bledsoe brings the sounds, smells, and sights of Cloud County to vivid reality in my own imagination. I am transported to walk among the characters he has created, a silent observer, watching the good, the evil, and the in-between create the paths of their lives. These are stories that ring with song, those rich ballads from ages ago, and new ones filled with love, longing, and a touch of magic.

Kera Rogers set out one afternoon to practice her music at a favorite spot in the woods.  A text conversation with her boyfriend abruptly cuts off and Kera is believed to have fallen victim to the wild hogs, led by a monstrous, seemingly supernatural one. When the young man she was seeing behind her boyfriend's back is the next to die, the plot, as they say, thickens. One of the things I particularly enjoyed about this tale was the telling: the split format of an adult Janet at the Smoky Mountain storytelling festival, relating the tale while intertwining her music and the basic narrative unwinding the memory of a happening in her girlhood.

If you've read any of the Tufa series, you may see characters you've met in other books, but if you've never come to Cloud County in your reading before, this, as with any of the books in the series, gives an easy glide in, without a preponderance of fill-in to catch you up.

Thank you to Tor Books for this copy.
Posted by bookczuk at 10:08 AM