The Girls of Atomic City: The Untold Story of the Women Who Helped Win World War II by Denise Kiernan 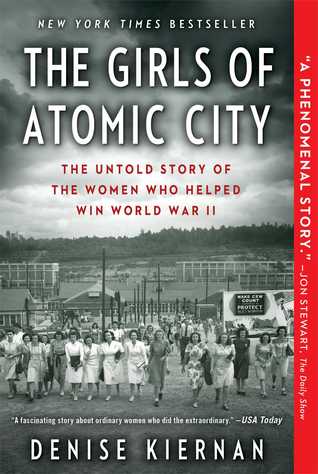 My father was a pathologist, with an interest in oncology. He was a pioneer in the work towards a cure for leukemia, and his quest took him on many unique journeys, both scientific and literal travels. He had this idea that you could inject an isotope into an infected guinea pig, and be able to read the path of the disease in the animal's body. He worked for the National Institutes of Health, and it was his resources there that allowed him to drive the family station wagon out to this place in Tennessee, and pick up a substance to help in the refining of his idea. Whatever it was that he picked up, was in a lead-lined box, and we kids weren't allowed near the box, or the car, when he got home. I remember him washing the car, inside and out, to "make it safe" for the family to ride in again. (I remember, because it was the only time I saw him ever wash the car. It was something relegated to his sons and daughter to do.) Daddy took the box to his lab and went on with his experiments. His career was illustrious, and his work brought him a nomination for the Nobel prize (he found out after the fact) and was the basis for other people to win the prize itself (which was a sore point for him.) The empty box hung around the lab, then came to our home where it was used as a door stop for years. The base has been lost, but we actually still have the lid, and some weights used to help keep the top secure on the car ride between Tennessee and Maryland. (My husband says that early exposure to radioactive material explains a lot about my family. I just glare at him.)

Maybe it was my childhood awareness of Oak Ridge, maybe it was my love of history, but I had put this book on my reading list. A friend sent it on to me (thank you Nancy!) when she saw I was interested in it. Such a fascinating collection of people, in a fascinating time and place. All were very ordinary, and very extraordinary at the same time. The secrecy surrounding the project, some of the rules and regulations, and the level of detail thought through in some areas (while totally ignored in others, such as what to do with the mud at the site, to allow people to get about) was fascinating. It did take me a little bit to keep the various people and their story lines straight (for though this is non-fiction, there are times when it really doesn't read as such.)

I found this a thoughtful and though-provoking look at history, and the women, from janitor to scientist, who helped build the atomic bomb. They did, indeed, change the world.
Posted by bookczuk at 5:20 PM