The Year of the Hare by Arto Paasilinna 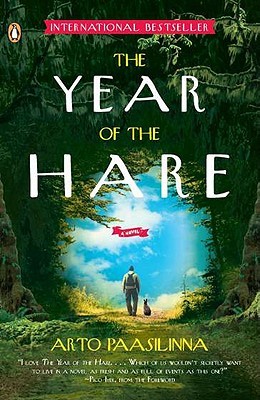 Getting a glimpse of Finland that doesn't involve murder, drugs, and detectives, but involves some true Finlanders, some mayhem, and a hare -- priceless.

Warm and fuzzy, the vignettes of this story are not (though the hare is). Charming, honest, direct, they are. Together they tell the story of Vatanen(what is his first name -- it's never told), a journalist, who while on assignment, comes across a baby hare who is injured (most probably by the car Vatanen is in, maybe even driving) and leaves his job, his somewhat unpleasant wife, and the life he knows, to trek around Finland with the hare. The characters he meets are so well drawn, I could picture how the scene would play out in a movie (thinking of the bulldozer driver here, after the forest fire, particularly). The work and situations he finds himself contain humor, and that dark slice of life that part of the world does so well.

I did find the narrative rather flat, as if a retelling, and wasn't sure if it was the translation into English or a style choice of the author, until the end.

Apparently Paasilinna is sort of a national treasure of Finland. I'd like to check out more of his books.
Posted by bookczuk at 8:50 AM