The afternoon light has just begun to take on the gleams of autumn, but not yet willing to release the intensity of summer. I love that time of September, when the balmy air wraps around like the softest cashmere, sliding like silk. As a girl, I dubbed it air bathing: when the air temperature and body temperature melded together like slipping into a glorious pool of water.

Walking around the city of my heart, which has been my home for many years, I found myself on a journey. Though I've lived roughly half of my days here in Charleston on James Island, the rest has been downtown, almost exclusively in Harleston Village. On this sultry afternoon, my steps wandered the streets of my past -- stopping at those places I had called home. 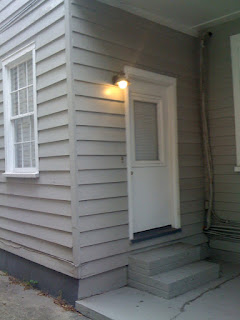 When I first relocated back to Charleston, it was shortly after my father had died. I searched for a place to make my nest which would allow me easy access to my work at the hospital, but, more important, it would be accessible to my mother, and would have a place for her to visit any time she wished. I packed up my car in St Louis, and, together with my cat, Tezra, began the journey that ended on Wentworth Street, in a 2 bedroom apartment, carved out of an old single family home. It was scruffy, definitely more student housing than that of a more permanent sort. Though it met my requirements, my neighbors were loud, and the cockroaches plentiful. I have some dreadful memories of living there, for with it came the end of a relationship, but I also have some wonderful ones. I recall making curtains for the bedroom with my mom. They matched the linens I'd purchased just after moving in.  (I still have the sheets we bought together. I use them up at the cabin, and they make me smile to remember the two of us sewing. Though we both loved to work with our hands, and were quite good at some things, we were terrible seamstresses. The only thing that kept those curtains from looking horrible was that the fabric was pretty.)  Or how we'd sit in the rather depressing living room, listening to "A Prarie Home Companion" on the radio. I tried to make that dark little apartment a home, but never was very successful.  When a wonderful little home a few blocks over came up for rent, I jumped at the chance, even though it meant I'd need to find a roommate. 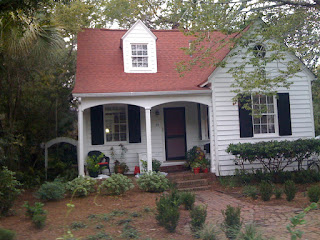 It was just a slight tumble over to the cottage on Gadsden, but there was a world of difference between the two. Despite the street that floods in high tide, and the miniscule kitchen, I'd move back into that place in a skinny minute. Though the roommate situation turned out to be the stuff of stories (not fairy tale kind, but the kind where the roommate ended up with a man who married her for her fortune and then tried to kill her.  I knew the marriage was doomed when the song she danced with her father, where her groom cut in, was "The Tennessee Waltz.") it was a great place. I hosted my first oyster roast there, got a crush on the boy next door, tried my hand at gardening, and turned out some great supper parties for friends, despite the miniscule kitchen.  But alas, the landlord's son got married and wanted the cottage for himself, so I packed up the cat and moved yet again. 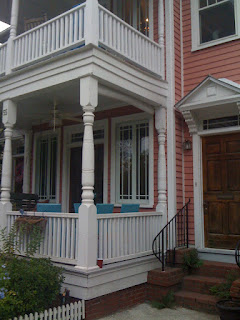 Luckily, there was a place around the corner, near a close friend. It was a comfortable duplex, and like its two predecessors, had a spot for my mother to visit, though she only came a time or two. It was the same shade of Pepto Bismol pink, but had lots of hard wood and deco interior elements. I was living there when I met Javaczuk. He was up in DC, but we managed to see each other regularly and talk daily. I would come home from the night shift at the hospital, and he would call every morning to wish me sweet dreams.  I remember standing up on the 7th floor of the hospital, watching Calhoun Street in the dawn hours, to see if I could find his car as he drove into town for a visit. My roommate of the time was a sweet, sincere young woman, who was studying to be a physician. Though she was skeptical about my sudden, passionate, long distance romance, she was a good sort, and feigned enthusiasm when he and I got engaged the second time we saw each other, 6 weeks after we'd met. She wished me well when I decided to follow my heart and move up to DC. 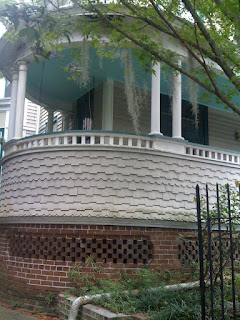 A few years later, we moved back to Charleston, this time with my mother. Together we purchased a home on Smith Street -- a glorious Queen Anne Victorian, where I thought I'd stay forever. Oh the memories from that house -- the laughter and love. It was a bountiful harbor for the family, and was there that our son was born. It weathered some losses, a hurricane or two, but still stood proud. My favorite spot was the curved portion of the front porch, where we set up a swing. I could sit there and listen to the sounds of the street, the birds in our garden, and the laughter of children playing. We had our reasons for moving, to numerous to list, but all valid and real. I was always sad that we left downtown, but it was something that had to be done at that time.

Life has its cycles. I feel the turn of another one for the two of us. We're beginning to shed ourselves of the possessions (both ours and others) that have built up in this lovely home by the lake we have here on the island. Our souls are yearning to find a spot in the city of our courtship again.  We are Charleston bound.
Posted by bookczuk at 12:52 PM