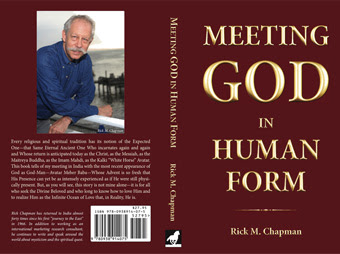 Reading books written by dear friends is always interesting, particularly when they are memoirs. I've known Rick Chapman over half my life. The image of his long form and dear mustachioed face is embedded deeply in my heart. I don't remember the initial meeting, but know that Rick has always been "family" to me -- one of those souls that clicks with mine, with the certainty that in another life, in another time, or maybe in one to come, our lives intertwined.

Rick is a brilliant, fascinating, multifaceted man. I've heard his thoughts on the philosophical and the spiritual (and confess that sometimes it's gone over my simple understanding.) I found this memoir introduced me to different aspects of Rick, some of which I'd seen shine through in this gem of a man, some of which had remained hidden to me. Here before me, in these 300 pages, was a youth in his early 20's, during the 60's, burning with a passion to know God. The man I first met was that same person, but tempered through time and life's lessons, no longer rough and raw. Through this book, I got to see the fire that drew Rick and forged him into that man. It fascinated me, and not just because it was a firsthand account of meeting Meher Baba, but because of the entire view into Rick's life, and into a time like no other. That it also featured people I know and love was an added bonus. I also liked reading his initial experiences in India, especially since the man I met a decade or so after had become so comfortable in that environment. And I confess that I'd forgotten he was a Fulbright scholar.

One thing that fascinated me was the difference between our two paths to God and our travels to India.  He first went seeking, and while that was part of my first trip, too, mine was more of a family journey. My brother and sister lived at the ashram, and the people who were legends to other seekers, were the life companions of my own family. I read about them in weekly letters home and had a glimpse into an intimate world of daily life at Meherabad and Meherazad.  When I met the mandali finally, it was more a comfortable recognition of family initially than meeting the companions of the Master.

My approach to my relationship with the Divine is pretty basic, too. Love God, be kind, do good works, hold fast.  I still screw up a lot, but I keep trying to get back on track. Having grown up in an atheistic/agnostic household, it's been an interesting journey. People who can discourse quite philosophically about spirituality and the soul's journey have usually either intimidated me or made my eyes glaze over. (In fact, when I was in India years ago, I despaired to Mani, Meher Baba's sister,  of my inability to read books about the spiritual journey. She gave me a gift to carry on, a legacy that Baba had given her: the release from reading about it, but the commitment to trying to live a life devoted to God.) Rick never has intimidated or bored me, and did not do so here, either.  In this book, he led me by the hand through the intensity of his discovery of a passion for God. He is a good companion for such travels.
Posted by bookczuk at 12:36 PM