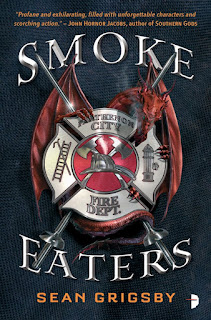 When I was three, we had a house fire. I was tucked in my bed in a tiny upstairs bedroom. A fireman rescued me, and when he set me in my mother's arms, I told her "he carried me out, just like Superman." I knew a good hero when I saw one. When I was offered the chance to read an ARC of Smoke Eaters, even though I wasn't sure if this was my kind of book, I said sure, because Firefighters vs Dragons? Heck yeah.

This was a good romp in a future world, where not only has the United States devolved into city states, but a plague of dragons is pretty much boiling up from the center of the earth, hellbent on feeding, mating, and consequently ravaging everything in their path. Cole Brannigan, a firefighter for 30 years, is just about to fight his last fire, when he finds out he one of the few people who are immune to dragon smoke. He is recruited into a group called the Smoke Eaters, an elite cadre of people who can withstand the smoke, and fight the creatures destroying the civilization above ground.

Things get dicey as the dragons get stronger, and political intrigue, in the form of a dastardly plot to take over the city, is discovered. Brannigan and his cohorts spring into action to fight the baddies, be they scaled or human. It's a pretty entertaining story. Oh, did I mention there are also wraiths? And robots? And some kick-ass battles?

Aside from my early firefighter interaction, my knowledge and appreciation of these men and women grew when my own son, also age three, developed a major fire truck (and firefighters, by extension) fascination. From that experience, and the inside views a hero-struck boy was given by very kind firemen* the details Sean Grigsby used in the novel all ring true, thanks to his firsthand experience as a firefighter.

It's my understanding that this may develop into a series. If so, I think it could be something fun to follow. I'd like to see a little tightening in the descriptions and rules of the world as it unfolds (but, I do like the cicada theory) and the interactions between the former US and Canada or other countries. The strengths of the book lie in the realism of the characters and of their work in fighting fire. One can extrapolate that the techniques applied to fighting dragons also rings true, but personally, I hope we never find out. But it settles one thing. I do want a robot dog.

I received my copy from the author's agent, for which I am most grateful. The book is due out in March 2018.

*There were no women that we met as firefighters in the early 1990's, though there are many now.
SaveSave
Posted by bookczuk at 5:26 PM