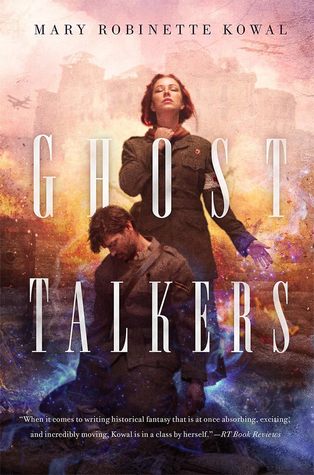 I'd like this book even if I didn't know Mary Robinette Kowal wrote it. But the fact that she did, had me quivering in anticipation until I could get my hands on a copy. It's got that MRK touch that brings a story to life. I think all her work in her other life, which include dramatic speaking, puppetry,  and voice acting, really helps shape her conversations so that they actually sound like conversations that occur in real life. They're not overly stuffed with information, the pace and emotions are realistic, and you can hear the characters speak in your head (or at least I can. And it's not that I'm hearing voices in the she-needs-medical-evaluation sense, but that the author has given life to her characters through their words, thoughts, and action, and I, as the reader, benefit from that.)

So, I've been to Regency England (with magic!) with Mary, and to Mars, and a bunch of other places. This time, she took me to WWI, and introduced me to the Spirit Corps, England's secret weapon that gets real time battle information and military intellegence from British soldiers on the front. The only catch is that these are soldiers who have died, and their ghosts are reporting in before following the light to whatever comes next. The details they are able to give, such as where they were, which direction the shot came from, etc, helps to give the British command valuable information.

In the meantime, Ginger Stuyvesant, an American who is engaged to intelligence officer Captain Ben Harford, is one of the mediums of the Spirit Corps. She and her circle discover there's a traitor in the system, mucking up the works, and helping the Germans who want to destroy the Spirit Corps. Even though she and her colleagues provide valuable information, they have a hard time convincing those in charge that there is a true threat. And when that threat is aimed at the Spirit Corp itself, Ginger and company move into action.

There's a lot to like in this novel. I did have a quibble or two with a couple of stereotypes, but they ended up being kind of fun against the other characters. Also, I did roll my eyes and groan, and complain to my husband that I thought Michael Livingston had a hand in getting one of the troops in the trenches mentioned. (Turns out, I was right, but had to wait 136 pages to the Acknowledgements to find out my hunch was correct. The man is everywhere!) There's also a love story (though that's not the, pardon the expression, thrust of the story. It's all very proper.)

My main dissatisfaction? That I have to wait for MRK to finish writing something else for me to read. Whatever it is, i'm pretty sure I'll squee with delight when I get my hands on that, too.