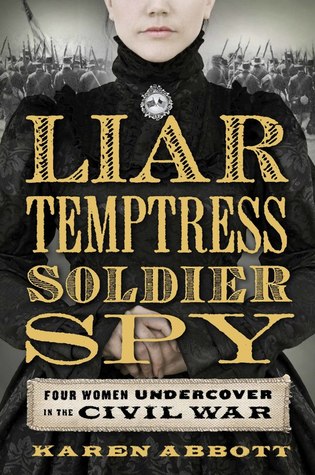 I've lived the north and south of the Civil War  aftermath: born and raised in the DC area, moved to a border state (home of the Dred-Scott  decision) for most of my adolescence, and then settled here in the South for the past 40 or so years. There are many aspects, besides the politics of the war, that I find fascinating. The fierce loyalty some folks have for their homeland, for instance, or the burning desire to fight for their personal beliefs. To me, fighting means taking an intellectual stand, not the physical personal risks the four women in Liar, Temptress, Soldier, Spy did. The women, each fully dedicated to their cause, are skillfully depicted by Karen Abbott. I heard her talk about the book on NPR, and the interview fascinated me so much, I immediately sought out the book.

The four women are very different in personality and approach to how they helped. Belle Boyd was flamboyant, rambunctious, daring in an overt way, very much an extroverted young woman. I found myself wondering what labels a psychiatrist would slap on her were she to end up on a couch today.  I suppose as a kid I sometimes fantasized about passing as a boy so that I could have a more rough and tumble life (I grew up in the late 50's), but I am not sure I would have tried to pass as a male and join the Union army, as Emma Edmonds did.  It's interesting, also to note, that there are several books out of late about women disguised as men and fighting in the Civil War. Edmonds experience was spurred not by the desire to be next to her sweetheart, unlike most of these women on other books, but to escape a bad home life and put distance between her present and past. Rose O’Neale Greenhow was the only one of the four women I really knew anything about beforehand, some of which I "knew" being incorrect. A clever and cunning spy, she was able to pass messages and information even when under house arrest by the Yankees. Elizabeth Van Lew, who lived in Richmond, was shunned as an abolitionist, while getting valuable information to the North, and aiding the escape of many Union prisoners and Southern slaves.

Oddly, though, the two people I want to read more about are not these four women, but "Little Rose", the youngest daughter of Greenhow, and Mary Elizabeth Bowser, a freed slave that Van Lew helped place in the southern white house as part of her spy ring. Bowser was both educated and possessed of a photographic memory, thus was able to gain access and recall intimate details of the strategy and plans discussed by Jefferson Davis and his officers.

A long, but interesting read.