The Hangman's Daughter by Oliver Potzsch: CSI in Medieval times. 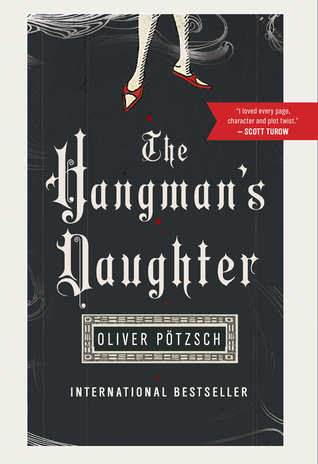 The Hangman's Daughter is a murder mystery back in the days well before CSI or even Sherlock (though several centuries after Brother Cadfael). Schongau, Germany in the 1600's is the setting. This happens to be one of my favorite areas of Germany, so it was fun to revisit it in a different era, sort of like a time machine.

An orphaned village boy is murdered, and witchcraft is suspected. The local midwife, who has saved the lives of village mothers and brought village babies into the world is accused, arrested, and to be "questioned" regarding the crimes. Jakob, the local Hangman, is determined to unravel the mystery, and save the woman who helped his wife give birth to his children from being burned at the stake. At the same time, he is the one, who by his very job, who must apply the persuasion (aka torture) that accompanies the village Aldermen's questioning to produce a confession of witchcraft.

The book bears the title of The Hangman's Daughter, though, not The Hangman. It is Jakob's daughter Magdelena, and university trained doctor Simon, who help Jakob in his investigation. Magdelena is the kind of character I like: smart, feisty, adventurous, inquisitive, and willing to go against the norm for the cause of justice.

I really liked the slice of history shown in this story. It always fascinates me that the wise women, or herbalists, who saved so many lives, were the very ones accused of witchcraft when something went wrong. Given that logic, and given the state of our world today, should we jail all the physicians to fix the ills of the world?
Posted by bookczuk at 8:48 AM